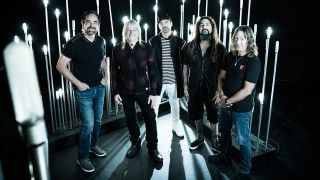 And in the new trailer, the band discuss the recording process, with drummer Portnoy explaining what makes being in the band special for him.

He says: “I think the vocal blend and the different voices is a big part of the sound of this band, and I guess as time has gone on, we’ve utilised it more.

“Obviously Casey is the lead singer, so when he’s singing, Neal and I will be backing him up. Or if Neal is singing lead, we do harmonies underneath it – and I get to rear my ugly head every once in a while as well!

“But I think the three-part vocal blend is one of my favourite parts of being in this band. I love that aspect of it.”

Prior to the released of Third Degree, the group shared videos for videos for You Are Not Alone, More and The Loss Inside.

Flying Colors are currently on tour in the US and will return to the UK and Europe in December.