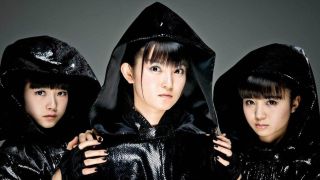 Fans in the UK have voted Japanese sensations Babymetal as the Best Live Act at the AIM Independent Music Awards.

They faced competition from Caravan Palace, Courteeners, Sunset Sons and Wolf Alice, but came first after the group’s fans across the UK placed them in the top spot after their show at London’s Wembley Arena in April and their appearance at Download in June.

Babymetal’s Su-Metal says: “The UK for us has always felt like our second home since the first time we performed at a festival here over two years ago.

“We’ve been back plenty of times recently performing our first headline show at the SSE Arena Wembley and the support from the UK only ever gets stronger. Thanks AIM for recognising Babymetal and to the fans for voting for us.

“We are more assured now that we can continue to stay true to ourselves as Babymetal.”

The trio broke two records in the UK this year. Their second album Metal Resistance achieved the highest-ever chart entry for a Japanese band, while merchandise sales at the Wembley show were the most for a one-day production in the venue’s history.

They’ll return to the UK later this year as support for Red Hot Chili Peppers’ run of shows across the country.