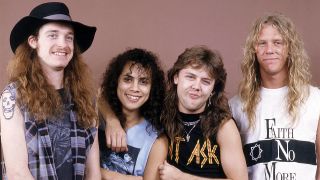 Metallica’s James Hetfield and Kirk Hammett have recalled the tour bus crash that killed bassist Cliff Burton 30 years ago this month – and how their first reaction to the tragedy was anger.

Burton died in Sweden on September 27, 1986, when he was thrown out of a bus window after the driver lost control, and the vehicle then rolled over him.

The accident left Hetfield, Hammett and drummer Lars Ulrich feeling lost and alone, and struggling to deal with their emotions.

Frontman Hetfield would have been sleeping in the same part of the bus as Burton if he hadn’t been trying to keep his throat intact from cold air seeping through the windows.

He tells In The Studio: “My throat was going bad, so I was asleep in the back lounge. The tour buses you see here are all metal-sided, but it was all windows on the side, and that was the main cause of the death.

“It hit so-called black ice, skidded out and bounced once, and that’s when he went through the window, and the bus went right on him. It was pretty quick and I know he didn’t know what hit him.”

Hetfield continues: “Coming out and finding your buddy under the bus is not something you want to go through. Our first reaction was anger – one of the things we were good at.

“‘Why did this happen? Where’s the driver? Let me smell your breath.’ I walked for miles looking for this black ice in my underwear, when it’s 20 below. There were screams from the crew who were still trapped in there, screaming in pain – broken collar bones, toes, all that.”

He remembers “jumping right into the bottle” and “getting totally ripped” with Hammett, although he admits: “It definitely didn’t help.”

Guitarist Hammett says: “Having to make that call to friends and family back home was difficult. It felt like reliving it all over again, it was so fresh in our minds.

“For at least the first 24 hours I was in total disbelief. It didn’t happen. I’d just block it out.

“Once we got home we had to deal with it all, deal with that sense of loss, and his funeral.”

He believes: “We didn’t give ourselves enough time to recover from the grief. We tried to get our heads together for a couple of weeks, then we regrouped and decided what to do.”

Metallica manager Peter Mensch was the person who told the band it would be best to keep going. Hetfield recalls: “Peter came out and said, ‘Get your therapy out through your music – jump right back on the horse and ride on.’

“We couldn’t believe this guy was telling us this. ‘What do you mean, man? This is our buddy. Screw you.’ It took us a few days to grasp the concept of that kind of strength. Cliff’s wishes were, ‘Battle on, friends.’”

Hammett agrees: “He wouldn’t want to see us lose the drive that he was part of.” He adds of the accident: “It’s one of those things you never learn the entire truth. We were all asleep when it happened. Who knows – maybe the driver was asleep too.”

Metallica regrouped with Jason Newsted as their new bassist and went on to release fourth album …And Justice For All in 1988. Their 10th title, Hardwired… To Self-Destruct, is released on November 18. They’ve just announced a tour of Latin America that kicks off next month.

16 Things You Might Not Have Known About Cliff Burton