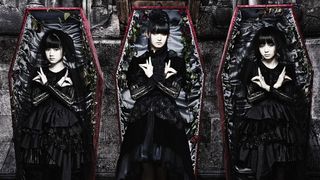 Last night the record was confirmed at the number seven position in the UK midweek album chart, which is the highest-ever entry by a Japanese band.

That came after the trio achieved the highest-ever merchandise takings for a one-day production in the history of the Wembley Arena venue, during their sold-out performance on Saturday. The show was streamed live to their home country.

The band’s Su-Metal says: “With our Wembley show we managed to unite UK and Japan, and we all became one together. It was an awesome feeling.”

Metal Resistance is on sale now, with limited-edition box set and vinyl versions available as of today. Babymetal’s tour schedule includes dates in the US, Europe and Japan in the coming months.

Your track-by-track guide to the new Babymetal album