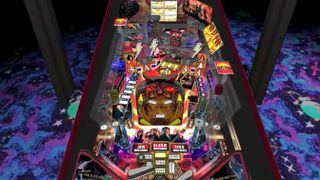 The company have a long association with pinball tables, with many of their creations previously converted to games consoles, PCs and tablets.

The AC/DC table features 12 track by the Aussie giants, including Back In Black, You Shook Me All Night Long, Highway To Hell, For Those About To Rock, Thunderstruck, Let There Be Rock and Whole Lotta Rosie.

Chairman and CEO of Stern Pinball Inc Gary Stern says: “The combination of rock and pinball can’t go wrong. With the introduction of the virtual reality version of AC/DC pinball, we’ve put an innovative and interactive spin on our much beloved pinball game while playing tribute to one of rock and roll’s most influential and memorable bands.”

The Stern Pinball Arcade was developed in partnership with Oculus and FarSight Studios.

Along with the oculus version on PC, the table will feature on the Stern Pinball Arcade on PlayStation 4, Xbox One, Wii-U, iOS and Android. The platform is free to download, and comes bundled with Mary Shelley’s Frankenstein. Additional tables, including the AC/DC version, can be purchased in-game.

In May this year, Stern unveiled a range of Kiss pinball machines featuring tracks including Shout It Out Loud, Detroit Rock City, Rock & Roll All Night and Love Gun. The tables are priced between $6000 and $8800.