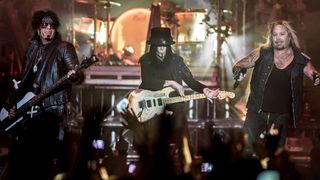 Motley Crue are being sued over the sale of merchandise on their Final Tour.

Photographers Neil Zlozower and Barry Levine claim photos they took of the US outfit three decades ago in Los Angeles were used on several items sold at concert venues, on their websites and on various third-party webstores.

They estimate that the tour made approximately $86 million over 130 concerts across the United States, 16 shows in Europe, five shows in Asia, six shows in Australia region, and one in South America.

The lawsuit filed on September 6 in the US District Court for the Southern District of New York states (via Blabbermouth): “Upon information and belief, in 2014, Motley, Motley Touring, Global Inc., Global Ltd, Live Worldwide, Live Concerts, Live Entertainment, and Live Merchandise copied the Zlozower Photographs and Levine Photographs and placed them on merchandise to sell to the public.”

A range of items including shirts, hoodies posters, stickers, mugs, magnets, coasters and shoes are thought to feature the unauthorised images.

Motley Crue will present their The End final show plus documentary footage in cinemas outside North America for one night in October.

Full details of the cinema event can be found at www.motleyincinema.com.