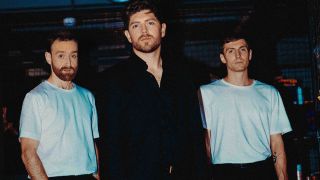 Twin Atlantic have released a video for their new single Barcelona.

The song has been taken from the Scottish outfit’s upcoming studio album Power, which is set to arrive on January 24 via Virgin EMI. The band previously release the track Novocaine in November last year.

Speaking about the themes behind the Klaas Diersmann-directed shoot, frontman Sam McTrusty says: “When considering the concept, I was inspired by the unique visage shots in films like Eternal Sunshine Of The Spotless Mind as I felt that these would be the best way to portray the kaleidoscopic, vignette style writing I used for the lyrics.

“After an initial chat with Klaas, I knew he understood the vision for the video instantly. I was blown away by the remote beauty of Kildare, Ireland, and it only added to the mystique.”

Diersmann adds: “The song feels like an intimate story revealing the reality of a relationship. I envisioned the couple in a beautiful yet eerie landscape, which took us to the wilds of Ireland.

“This enabled us to contrast their emotional entrapment within their relationship and their memories with this almost other-worldly wide open space.”

Twin Atlantic will head out on a run of in-store appearances across the UK later this month to launch the album.

Then, in March, they’ll play a series of headline shows in the UK and are set to appear at Glasgow’s TRNSMT Festival on July 11.

Twin Atlantic: Power
Twin Atlantic return with their new studio album Power. The follow-up to 2016's GLA features the singles Novocaine and Barcelona. They'll also head out on the road throughout March.View Deal