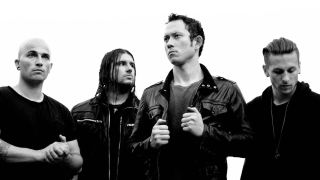 Trivium frontman Matt Heafy has revealed he only took up screaming because he couldn’t sing.

He’s delighted he can now deliver more melodic vocals – despite the mixed response to latest track Silence In The Snow.

Heafy says: “Since I was 12 I wanted to be a great singer. I screamed because I couldn’t sing. I’m proud and excited to finally be able to do what I love the way I love.

“Screaming is easy – singing in hard. I’ve always been a fan of what’s harder.”

He explains the track, which gives Trivium’s seventh album its title, was written during sessions for 2008 album Shogun, saying: “Shogun fans rejoice. Didn’t like Shogun? You may not dig this.”

And he adds: “I love both sides of you all regardless. We always want to evolve, and make what we want to make. Other bands do what they think people want, or are told to – we do what we want every time. And we love our Trivium supporters worldwide.”

Silence In The Snow, the follow-up to 2013’s Vengeance Falls, is released on October 2. The band play Bloodstock this weekend.