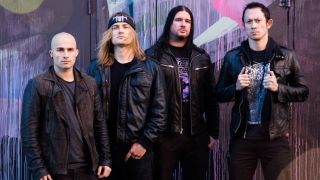 Trivium frontman Matt Heafy says the band have already written “a lot of material” for their next album.

The band’s latest effort Silence In The Snow was released last year and Heafy says the band have been writing any chance they get – with the follow-up expected in 2017.

He tells Spotlightnews: “We don’t wait till we have to start writing a record. We’re just constantly writing, all the time, because it’s just something we like to do. So, we have a lot of material already.

“Once we start thinking about a record we’ll dive through it all and figure out what in the pile is what we’re looking to do for the direction of the record.

“Hopefully, we’re thinking about a record sometime next year. I think we’ll be in the timeframe for that.”

Heafy adds that Trivium accept a number of fans will be “bummed” by any new music they release, but that he believes records need time to be fully appreciated.

He says: “With every album you’re guaranteed fans with expectations of what they think the record is going to be, and not be what it is, and be bummed and say something bad about it.

“We always think records need time. Every record that we put out, when you give it five or six months, their opinions change because they actually listen to it.

“They adjust and appreciate what you’re doing for that record. Every record has had its moments where there’s been resistance. But, those records over time turn out to be some of people’s favourite albums.”

Trivium are currently on tour with Sevendust.

Trivium US tour dates with Sevendust