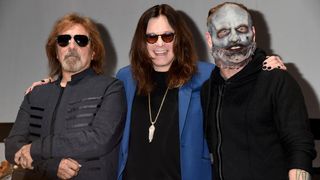 Ozzfest and Knotfest have joined forces for a special weekend bill in California this September.

The event is billed as Ozzfest Meets Knotfest and it’ll run over September 24 and 25 at the San Manuel Amphitheatre in San Bernardino, California.

Sunday will be given over to Knotfest, and joining headliners Slipknot will be Slayer, Amon Amarth, Anthrax, Trivium, Sabaton, Suicide Silence, Whitechapel, Emmure, OverKill, Butcher Babies, Man With A Mission, Combichrist, Death Angel, Sim and Oni.

Tickets go on sale on May 20 from 10am PST, while VIP packages will also be available.

Sabbath frontman Ozzy was joined onstage by his estranged wife Sharon Osbourne for the festival announcement. She put the couple’s recent difficulties behind her to tell the crowd at the Hollywood Palladium: “20 years ago, we realised that there was no touring festival that supported music like these guys did.

“We came up with Ozzfest and for 20 years it was amazing. And for many of those years we had the unbelievable Slipknot playing. And Slipknot came along and kicked our arses and created Knotfest.

“They took that around the world and it was hugely successful and critically acclaimed as one of the best festivals on Earth.

“Then we decided, ‘Why not merge together?’”

In addition to the music, there will be a Thunderdome Battle Arena, massive fire displays, carnival rides, travelling troupes of freaks, a monster truck arena and a rollercoaster called the Children of The Grave-Itron.