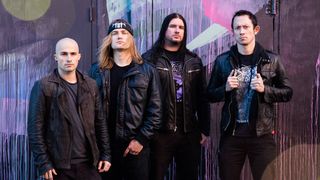 Trivium mainman Matt Heafy says the decision to recruit drummer Paul Wandtke has been a revelation.

He joined the Florida outfit last year on the recommendation of Dream Theater’s Mike Mangini and replaced Mat Madiro who departed due to reasons of “creativity.”

And Heafy says even after only a few months with Wandtke, it feels as if he’s been part of the group for years.

“At each point in time, we had to make a drummer change because our band either wasn’t able to perform well or create good music or be functional as a unit anymore. So, thankfully with someone like Paul who comes to the table with a full set of musical pedigree, it allows us to play anything.

“We’re playing music from records two-seven now. I finally retrained myself how to scream again, so everything is exactly how it was.”

Heafy knew finding the right man to fill in the drum position was vital, as they didn’t have the time to train someone up.

He adds: “Paul’s an amazing drummer. He’s what we’ve always been missing. We’ve been missing someone who can keep up with us musically and creatively. Someone who already has stage presence. He comes to the table completely prepared. It’s as if he’s been with us the whole time.”

Trivium will head out on the road later this month with Sevendust in support of their latest album Silence In The Snow.

Trivium US tour dates with Sevendust