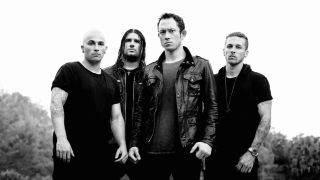 He blew out his voice during a show in Columbus, Ohio, last year and the band were forced to cancel shows as a result. But when he made his live return, fans noticed changes in his performance.

And on Trivium’s latest single Silence In The Snow, he can be heard delivering a more melodic sound, a pattern which is followed throughout the album of the same name.

“Not only has he helped my clean singing, but he’s taught me a correct screaming technique, because what I’d been doing for 15 years was incorrect and I was on the brink of destroying my voice.

“In the past, singing was such a strain and screaming would give me headaches and make my lungs hurt and my throat hurt. But I thought that was the way it was supposed to be.”

As well as changes to how he sings because of the damage done to his voice, Heafy says the band wanted to challenge themselves on Silence In The Snow, which is released on October 2.

He adds: “We wanted to do something we hadn’t done before. That doesn’t mean we’re not as heavy or are watered down – we’re just trying to push the boundaries on what we’re capable of doing.”

The full interview appears in the current issue of Metal Hammer magazine, available now in print, digital and via TeamRock +.