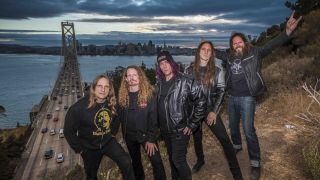 Exodus have announced a UK tour with support from Obituary, Prong and King Parrot, to take place in October.

And the headline act’s frontman Steve ‘Zetro’ Souza has promised to bring a “heavy fucking show” to Britain under the Battle Of The Bays banner.

Souza says: “Myself and the rest of Exodus are excited. Both Obituary and Prong are legendary bands that have solidified themselves in our genre – and King Parrot have us all turning our heads on what to expect from metal in the future.

“Look out. You’ve been warned!”