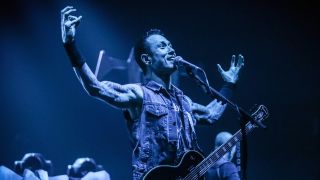 Trivium have cancelled the last four dates of their US tour on doctor’s orders.

Singer Matt Heafy reports he overworked his vocal chords during a gig in Columbus, Ohio, and that his doctor told him to rest up for two weeks.

Trivium are due to travel to Europe for a number of festival dates, which Heafy has vowed will still go ahead.

He says: “My voice blew out by the end of yesterday’s set. My doctor’s orders are that I need two weeks of rest before resume singing, and as a result, Trivium will cancel our remaining shows this week.

“I have cancelled one show previously due to vocal issues, and this time even with the numerous precautions I take every single day on the road to ensure the greatest performance for those who keep me alive, my voice still gave out.

“I’ll do everything I can do make my vocals back to 100% before Europe, and know that we will come back and make up shows in Salt Lake City, Birmingham, Baton Rouge, Memphis, and Pryor. I don’t know when, but you are not forgotten.”

The band parted company with drummer Nick Augusto earlier this month. They released sixth album Vengeance Falls last year. They play the Download festival on June 15 then The Academy in Dublin on June 17.