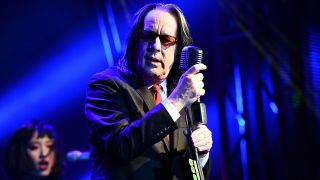 Todd Rundgren has announced that he’ll head out on a world tour in 2019.

He’s lined up 26 dates which will get under way at Theater Am Mareintor in Duisburg, Germany, on April 1 and wrap up with a set at the NHK Hall in Osaka, Japan, on May 23.

Rundgren will hit the road under The Individualist banner – named after the Rock And Roll Hall Of Fame nominee’s long-awaited autobiography, The Individualist: Digressions, Dreams & Dissertations, which is soon to be published by Cleopatra Press.

The book documents Rundgren’s life through his 50th birthday, with the setlist for the upcoming tour mirroring that period in his life.

Tickets will go on sale from December 10 at 9am local time. Find a full list of dates below.

Rundgren will find out next week if he’s been inducted into the Rock And Roll Hall Of Fame in 2019. He’s nominated alongside Def Leppard, Stevie Nicks, Radiohead, The Cure, Rage Against The Machine, Roxy Music, Devo, Kraftwerk, the Zombies, MC5, John Prine, Rufus featuring Chaka Khan, LL Cool J and Janet Jackson.

The induction ceremony will take place at the Barclays Center in Brooklyn, on March 29, 2019.