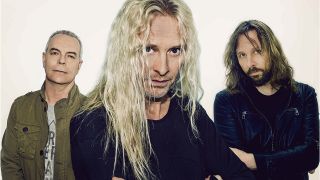 The Mute Gods have revealed that they’ll release their third studio album in the coming months.

The follow-up to 2017’s Tardigrades Will Inherit The Earth is titled Atheists And Believers and it will arrive on March 22.

In November last year, drummer Minnemann said he was working with Lifeson on a new project, but it’s not clear if that was for The Mute Gods or a solo release.

Atheists And Believers is said to focus on topics including “politics, humanity and love” and span “turbulent rock compositions to more sentimental pieces of music.”

Beggs says: “The album’s key message is that we now empower stupid people and don’t listen to educated, informed experts anymore because truth is no longer fashionable.”

Atheists And Believers will launch on CD Digipak, Gatefold 180g 2LP/CD and on digital and streaming platforms.

Check out the cover art and tracklist below.