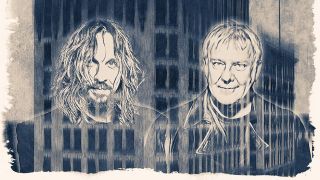 Minnemann, who’s best-known for his solo career and work with The Aristocrats, Steven Wilson and The Mute Gods, revealed the news on Facebook along with an illustration of the pair by Tom Colbie.

Minnemann says: “Working on a new collaborative release together with Rush’s Alex Lifeson. Watch this space for more details to follow soon.”

But the one question Rush fans want to know is: Who’s going to be playing bass in the project?

Rush have been on hiatus since wrapping up their North American R40 tour in 2015, with Lifeson reporting in January this year that the band were “basically done.”

And, just last month, bassist Geddy Lee quashed any hopes that Rush could tour again together in the future by saying there was “no chance” of that happening.

Meanwhile, Rush’s classic 1978 album Hemispheres will be reissued on November 16 to mark its 40th anniversary. Along with the original album, the new version will also include their set from the Pinkpop Festival in June 1979 along with a disc of 5.1 mixes and rare material.