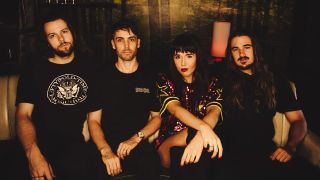 Brisbane-based heavy prog rockers The Atomic Beau Project have released a new video for their brand new single Time. Time will be released tomorrow "and heralds a bigger, bolder and broader sound for the band, with far more attack and light/shade than ever before".

"Time is the story of a man who finds himself trapped in a world where time slows down," says singer Beau. "Whilst his body slowly deteriorates over time, he continues to think and function normally, fully experiencing the horrifying event as it unfolds.

"This is the thing we have created that we are most proud of so far. We are so incredibly excited to release this into the world and show everyone what The Atomic Beau Project is all about - we feel this song and clip totally embodies that."

Originally a studio project, The Atomic Beau Project have now bolstered their line-up with Jack Gardiner on guitar, Luke Woollett on bass and Andy James on drums.