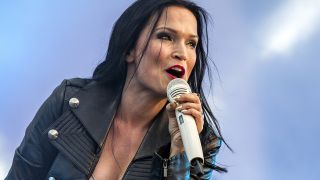 Tarja Turunen has released a lyric video for her new single Dead Promises.

It’s the first taste of material from the former Nightwish vocalist’s upcoming album In The Raw, further details of which will be revealed later this week.

Speaking about Dead Promises, Tarja says: “I really like how the guitar sounds – in your face. If I’m singing powerfully, I need something powerful behind me so that I don’t feel like I am left alone.”

The only other detail known about the new studio album at the moment is that it will feature a guest vocal appearance from Soilwork’s Björn “Speed” Strid.

Dead Promises will be available to download and stream from this coming Friday (May 3).

The live package was split into two separate sets – the first was captured at London’s Metropolis Studios on June 6, 2017, in front of 20 competition winners from across Europe.

The second set was recorded on November 29, 2016, at Milan’s Teatro della Luna Allago, and features tracks from all four of Tarja’s solo albums and a cover of Muse track Supremacy.

Tarja - Act II
Former Nightwish vocalist Tarja Turunen returns with the sequel to her 2012 debut solo album Act I: Live In Rosario. Featuring material from all four of her albums, this is not to be missedView Deal