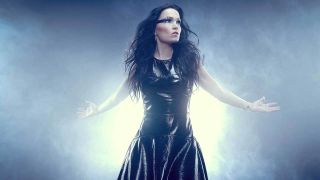 As Nightwish’s first female vocalist, Tarja Turunen set the bar high for those who followed. After her very public dismissal in 2005, she launched a successful solo career and has never looked back – the singer has even been presented with her very own emoji by The Finnish Ministry for Foreign Affairs! She’s now about to release not one but two new studio albums – a ‘prequel’ called The Brightest Void on June 3 and The Shadow Self on August 5. But what drives the real Tarja?

“My husband [Marcelo Cabuli] and I have a big music collection of maybe around 7,000 CDs. CD is still my favourite format but I do have a few records as well. I used to have more but, quite idiotically, I gave away most of my vinyl when I was younger.

“We love listening to different styles so we have everything in our collection! I’m a music lover; I listen to various styles to get inspiration or to relax or to get energy, but if it lacks emotion, it’s not for me. If there wasn’t music around we would all become very miserable.

“The last album I bought was an Annie Lennox covers album Nostalgia. I also bought Muse’s live album [Live At Rome Olympic Stadium] and I love Blue October’s Home. I’m a huge fan of the James Bond soundtracks too. I take a lot of inspiration from them in my own songwriting. I think Metal Hammer readers should listen to [18th century Italian composer] Pergolesi’s Stabat Mater – that is emotional classical music – and I love Peter Gabriel’s classic album So. He’s been as inspiration to me for many years. I love his work.”

“I am really not interested in politics but I am shocked by the way the media handles politics in a country like Argentina, where I’ve been living the past few years. Recently, I was interviewed [for Finnish tabloid Iltalehti] and I happened to say that my husband and I had decided to leave Argentina for the sake of our daughter because the political situation there was so uncertain. The Argentinean websites picked up on that and I got into trouble with the media there. It even made the local news in Argentina! The government actually changed at exactly the same time I was leaving the country. I wrote a song about the way politicians work on [new album] The Brightest Void called Shameless. It’s all about politics and dirty business.”

“I wouldn’t call myself a religious person, I’m more of a spiritual person. I was baptised as Lutheran [a branch of Protestant Christianity that’s popular in many of the Scandinavian countries], not that I really follow the church. When I was little, my mother taught me a prayer that I said before I went to sleep and we used to go to the church before Christmas, but that was about it. I do believe in God but it’s a very personal thing for me.

“These days, I probably spend more time performing in churches than I do attending services in them. The acoustics make them nice places to perform in and you get a different kind of atmosphere when you hold a show there. They’re designed for musical performance and they’re beautiful places.”

“I hardly ever watch TV. Sometimes I’ll have it on in the background when I go to sleep but I don’t really watch it because I prefer to sleep! I love movies, although I usually go to movie theatres and watch them on the big screen.

“I used to watch children’s cartoons with my daughter [Naomi] but that’s about all I’ve seen in the last three years! While I’m travelling and when I’m on tour, I like watching documentaries – I enjoy biographies, travel documentaries, nature programmes… stuff like that. I watched a music documentary on Mötley Crüe recently, and I always love watching what’s going on with nature and the natural world. I like checking out health programmes too. Just recently I was watching one about sugar, about how much sugar there is in everything we eat. Scary things like that!

“I haven’t seen Game Of Thrones yet – I think I’m probably one of the only people who hasn’t! It’s something I do want to watch in the future. I’ve seen clips of it and I love looking at the costumes. I like historical movies for this reason, I love checking out the work behind creating these amazing costumes. Designing clothes is something that really interests me because I plan my own performing outfits.”

“I’m a football fan. I got involved in that when I married an Argentinean! I remember at the beginning of our relationship – in 2000-and-something – we went to see Inter Milan play in Italy with some friends. The feeling and atmosphere at that match was incredible. How is it that something can move mountains of people in the same way emotionally? It was like being at a concert and I felt a real emotional connection.

“I now support San Lorenzo – they’re probably the third biggest team in Argentina and I wear their shirts when I’m in the gym! Whenever it’s possible, I go to their matches but it’s more complicated now I have a child and we’re never in one place.

“When I was a kid, I was the only girl in my class for almost six years at primary school and I have two brothers as well. Being the only girl, I hung around with the guys and played football with them. But Finland and football don’t really go hand-in-hand; it’s more ice skating and ice hockey there. My three-year-old daughter is really into football though. She has her own football boots and practises with the local boys!”

“I’m as healthy as I can be right now. I’ve never smoked and I’ve never been into drinking but I do enjoy a couple of glasses of red wine. I got more involved with that when I moved to Argentina [in 2005] as they have really, really nice wines there. I also need to keep fit in order to survive all the gigs so I regularly go to the gym, go swimming and running. Taking care of my physical needs is very important – if my body is not healthy then my voice won’t be either.

“I turn 40 next year and maybe I’m now seeing the results of everything I did in the past, when I was stupid and young. I didn’t take care of myself then. Now I suffer from neck pain, which comes from headbanging, for sure. I’ve had physiotherapy and I have to take care that I don’t mess myself up when I go to the gym. When you’re a kid, you don’t need to pay attention to these kinds of things though. My daughter sleeps in very strange positions on the plane and it never seems to bother her.

“I have also suffered from upset stomachs all my life and was never really interested in why. Now I know that gluten is very bad for me so I try to eat a gluten-free diet and take vitamins and minerals. I also drink considerably more water than before. I eat as healthily as I can but I don’t eat any diet foods. I like butter, lots of butter, and avocado – all the good fats!”

“My fans are incredible. There are many who follow me in both the metal and classical worlds; they’ve always been there and they’re very loyal to me. I named [my first solo album] My Winter Storm after them because they are the storm that keeps me going.

“Whenever I have the chance, I hold meet and greets, either before or after the show. It’s nicer to do them afterwards because you get to hear the feedback from everybody. There are many amazing things my fans have done and are still doing for me. I’ve met quite a few who have named their children after me as well. I think one of the oldest is about seven or eight years old now.

“I have many fans who have my name, my signature, part of my lyrics, or even my face tattooed onto them. In one way it’s weird, but in another way it’s an honour. It’s your body, your skin; it’s part of you and it will always be there so it’s a really big deal to get a tattoo. I only have one myself [flowers with her daughter’s name inked onto her leg] as I see tattoos as something that’s very personal but music can affect people in a personal way too.”

Tarja releases The Brightest Void on June 3 and The Shadow Self on August 5, via earMUSIC.