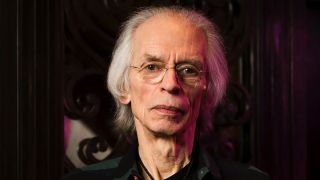 Steve Howe has announced he will release his latest solo album, Love Is, through BMG Records on July 31. It's Howe's first solo album for nine years (since 2011's all-instrumental Time) and features 10-tracks, five instrumental and five vocal. Love Is, which was originally announced in February, was scheduled for an April 17 release, but this has been put back.

“I called the album Love Is because it hints at the central idea that that love is important but also love of the universe and the ecology of the world is very important,” says Howe. “Alexander Humboldt went around the world and recognised we are destroying the planet but that was 200 years ago!

"We are still destroying the planet and, I suppose, my songs show the yearning I have for the love of nature and how beauty, art and music all stem from nature. There is a theme about those things, love, beauty, ecology, nature and wonderful people."

“I invited Jon Davison to sing harmonies with me and add bass on the songs< Howe explaIns. "If he was singing on the songs I thought why doesn’t he play bass as well and it turned out nice. He’s been with Yes for seven or eight years and he’s a great guy, great performer and a great interpreter of Yes songs.

“I’ve been singing for years, mainly in harmony but I’ve sung lead on lots of my own albums before and I feel that, as I’ve got older, I’ve got a grip on that and, hopefully, it’s improved over the years.”

Love Is will be available as CD with gatefold digi-sleeve and 12 page booklet and black vinyl 180gm with gatefold sleeve, liner notes and lyrics.