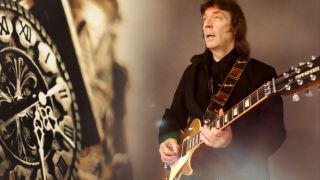 Reed decided to cover Hackett’s 1979 solo album title track because he’d always admired the piece. He recently said: “I thought it would be amazing to re-record with the addition of lyrics.

“David wrote them and we did a demo, which sounded fantastic. I had the idea of a duet, so we asked Christina. Steve kindly agreed to play guitar on the track, which was wonderful.

“I really think we have been respectful to the original piece and hopefully brought something new to it as well.”