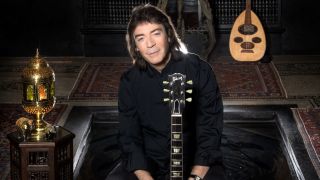 Steve Hackett has given further details on his upcoming album The Night Siren.

The follow-up to 2014’s Wolflight is due for release on March 24 via InsideOut Music. And in an new interview, the former Genesis man reports that the record is a wake-up call and a response to the right-wing ideas currently dominating the political landscape.

Hackett worked with a multicultural cast of musicians on the album – and he says bringing people from all over the world together was vital in creating the album.

He says: “Really the idea of the album The Night Siren is a kind of wake-up call. The idea that we are in troubled times at the moment and the alternative is the way I’ve worked with people from all over the world on the album – a whole united nations of 20 people or so.

“The message is basically peace. If musicians can work together peacefully, I don’t see why the rest of the world can’t to it. That’s basically the idea behind the album.

He reports that the dark nature of the title reflects the current state of the world and adds: “I thought it would make a very strong title for the album. In a way it was a very dark title, but I thought, ‘Well I think people are ready for this’ because we are living in dark times – we are about to enter the dark ages.

“I’m no great believer in right-wing politics. We need compassion or else we’re going to say goodbye to this world very, very quickly.”

Hackett will kick off his Genesis Revisited UK and Ireland tour in April where he’ll celebrate the 40th anniversary of the Wind And Wuthering album.

Along with playing material from the 1976 Genesis record, Hackett will play tracks from The Night Siren, which is now available for pre-order. He released the track In The Skeleton Gallery earlier this month.

Steve Hackett on the cast behind solo album The Night Siren