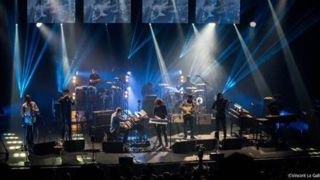 Three-time Grammy winners Snarky Puppy have announced UK live dates for September, including a night at London's prestigious Royal Albert Hall. The band have also released a new promo video for new song Bad Kids At The Back, which you can watch below.

“The band is so excited about bringing 11 new songs to the UK on our upcoming tour," band leader Michael League told Prog. "Of course we'll be mixing them in with material from previous albums (including some very old songs we haven't played in years), but it will be really special sharing the new ones with the audience who first welcomed us to Europe in 2012.”

Bad Kids At The Back is taken from the band's forthcoming new album Immigrance, which will be released in March. The video was inspired by films like Richard Linklater’s Waking Life, Ralph Bakshi’s American Pop and Disney’s 1937 classic Snow White and the Seven Dwarfs, and utilises rotoscoped visuals to turn an in-studio performance into one of the wildest animated videos you will see this year.