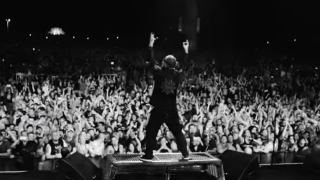 Slipknot’s summer North American tour with Marilyn Manson and Of Mice & Men is celebrated in a video released by Rockstar energy drink.

The tour wrapped up last month and a five-minute clip soundtracked by Slipknot track Skeptic can be viewed below. It features footage of the band in action on the tour.

The opening dates of the tour were postponed when Slipknot frontman Corey Taylor had to have surgery on his spine after he learned he had broken his neck without even realising it.

Slipknot were on the road in support of their fifth album .5: The Gray Chapter, which was released in 2014. Manson was touring to promote his latest effort The Pale Emperor, issued in 2015, while Of Mice & Men’s fourth album Cold World came out earlier this month.

Taylor recently said the band were now at the top of their game when it comes to live performances.

He said: “We’ve been able to use our history and make it something new – instead of looking in a rearview mirror, we’re looking out the windshield at what’s to come.

“I think that’s why people are gravitating towards this. It doesn’t feel like a greatest hits set. It feels like we’re just hitting our stride. For a band that’s been around for 17 years, that’s a hell of a feeling.”

Slipknot will to perform 2001 album Iowa in full at their Knotfest event in San Bernardino on September 25 (Sunday). In July, Metal Hammer readers voted Iowa the greatest album of the 21st century.

Knotfest goes to Toluca in Mexico on October 15 and 16 and then to Tokyo in Japan on November 5.