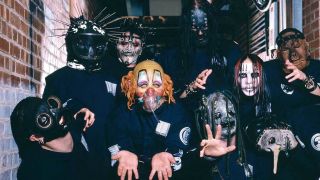 Slipknot frontman Corey Taylor has recalled how the band almost split after their first album as a “fuck you” to the music industry.

Their self-titled debut was released in 1999 and the backlash that surrounded it nearly led the band to call it quits before they eventually made 2001’s follow-up Iowa.

Taylor tells Alternative Press: “That was one of those ideas that I was so in love with because it was such a ‘fuck you’ to the industry.

“Just to pull a total Sex Pistols and make one monstrously fucking destructive album then just be like, ‘No, that’s all you fucking get, fuck you.’

“I just remember the excitement on all of our faces and in all of our hearts. I even told some friends ‘Yeah dude, we’re gonna break up,’ and they were like ‘What the hell are you talking about?’ They just thought we were fucking crazy.”

Iowa celebrates its 15th anniversary on August 28 and Taylor remembers the night his bandmate Shawn ‘Clown’ Crahan floated the idea of calling the album after the band’s home state.

He says: “I remember playing a gig where there were no dressing rooms. There was just a conference room and we were all in there getting ready and someone had left a dry-erase board in there.

“With dudes in a band, you might as well have just left cans of spray-paint, some shit’s gonna go down. Clown starts drawing pictures of what the next album’s cover would be, and of course it was obnoxious – a weird fucking badly drawn dog just pissing on shit, and it was just fucking ridiculous.”

He continues: “But then he wrote ‘Iowa’ on the cover and said, ‘We should totally name the next fucking album Iowa.’ And we all loved that. We were so fucking into it.

“I can remember even after we were almost finished with the album, and there was an idea of changing the name. I was like, ‘No, fuck that, it has to be Iowa.’

“People needed to know what it was like for us growing up in that fucking hell hole. People need to feel the fucking destructiveness of Iowa. We have to fucking stick a knife into that fucking midwest PC bullshit and let it die and spit on it as it fucking dies.”

Taylor recently hinted that the band could perform a one-off anniversary show to celebrate one of their albums, but didn’t confirm whether it would be for Iowa.

Slipknot have a number of tour dates still to come in 2016.