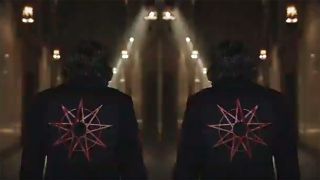 Slipknot have released a third teaser video ahead of an expected announcement later today.

The band previously shared two clips featuring shots of the band along with another on their website showing a counter that click up to 0516 – suggesting they're about to reveal something imminently.

The new clip follows the same style as the previous two, featuring quick cuts spliced together and ends with a shot of Corey Taylor walking into a cathedral. Just as he’s about to turn to face the camera, the video ends abruptly.

The one minute video is accompanied by an eerie choir and the caption: “You’ve Killed The Saint In Me.”

Could today's expected announcement be a new video from the band’s highly anticipated new studio album, which is set to arrive on August 9? Watch this space.

Slipknot could also reveal their masks later ahead of their appearance on Jimmy Kimmel Live! tomorrow night (May 17).

They’ll take to the show’s outdoor stage to perform a handful of tracks, with the broadcast going out on ABC at 11.35pm ET (4.35am GMT).