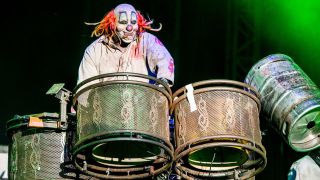 Slipknot’s Clown says the movie business isn’t all it’s cracked up to be after he directed his first film, Officer Downe.

The percussionist, real name Shawn Crahan, says both the movie and music industries are ultimately the “same animal, just packaged differently” – but that rock’n’roll is much more fun.

He tells Loudwire: “Maybe I thought the movie business would be a little bit different than the rock ‘n’ roll business, but, in fact, they’re the same animal just packaged differently. The business is still very precise and very pristine to the output of it.

“So, I think that’s the only thing I was hoping that maybe the corporate world would be a little bit separate to give me a break – but it ended up all being the same thing.

“It’s not even close to being as fun as rock ‘n’ roll. The music business is just pirates and fun and it’s just out there. The movie business is the ‘here and the now.’”

Clown recalls seeing a star-studded movie production near his own film set one day and being surprised at how run-of-the-mill it seemed.

He adds: “Big movie stars just pulled up in normal cars and had normal clothes and were just having the bottom of the ladder people tell them where to go and giving them tickets for lunch. I’m like, ‘That person is huge and they’re just getting treated mediocrely. I can’t believe it!’

“If they came over into my world, everybody is treated pretty well out there. So, it’s a big difference between the two for sure.”

Clown says that Officer Downe has been confirmed for this year’s LA Film Festival later this year – but further release details for Officer Downe will be revealed in due course.

Meanwhile, Slipknot are currently touring North America with Marilyn Manson and Of Mice And Men.