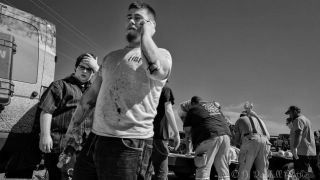 Blythe's picture of the driver at the scene (Image credit: D Randall Blythe)

Lamb Of God frontman Randy Blythe says he’s lucky to be alive after a truck crash at the weekend.

He’s described the event as a “real-life horror movie” in a series of Instagram posts, complete with pictures from the scene on a country road in Oklahoma.

None of his party were injured, but the four people travelling in the truck that crashed into their stationary vehicle all required medical attention.

“I sat parked on the side of the road and watched as you ploughed into our chase vehicle’s trailer. I saw your truck hit it and fly into the air. You had hit another truck before you even crashed into our trailer.”

Blythe goes on to explain how he and his friends ran to help the passengers get clear, while concerned that the truck might explode at any moment, and worried about moving the victims in case they had serious injuries.

“It was a real-life horror movie,” he says. “I prayed as I moved towards you, ‘Please God don’t let anyone be dead.’

“You, the driver, kept yelling, ‘My brakes went out!’ This is bullshit. The skidmarks tell us a different story. You must have been going 80mph. You were so quick to deny blame, screeching your head off before the rest of your friends were even out of your mangled truck.

“You are a child – a child driving a huge, deadly weapon.”

But Blythe accepts he made his own mistakes when he was younger, telling the driver: “I was just like you once, careless and irresponsible. My luck ran strong, but I changed my ways before it ran out.

“You got a second chance, just like I did. I suggest you take it.”

Lamb Of God have a number of tour dates scheduled over the coming months.