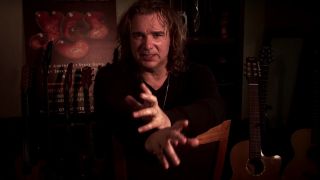 Sherwood says: “It’s a concept album about a lost soul reincarnated in various historical settings. At one point, the character is reincarnated during The Great Depression and is dealing with the loss of everything and is forced to take drastic measures.

“Another time, the citizen is a World War One trench-runner for a song called No Man’s Land, where he’s running through the fields watching his comrades die.”

Sherwood confirms that the album’s protagonist also appears as an astronaut, a Roman Legionnaire, a factory worker during the industrial age and the assistant to 16th century astronomer Galileo.

He adds: “While I’ve created a lot of this record myself I couldn’t have done it without the amazing talents brought to bear by all the great artists who participated. I feel it’s much more of a collective effort than a solo album.”

Sherwood, who took over bass duties in Yes following the death of Chris Squire, recently issued a career retrospective titled Collection and made his 2014 album Divided By One available on CD for the first time.