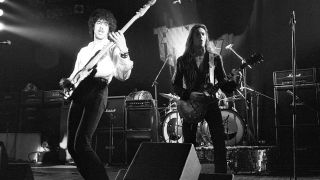 Scott Gorham has reacted to Thin Lizzy missing out on entry into The Rock And Roll Hall Of Fame this year.

The band received their first ever nomination for the Rock Hall, and were one of 16 artists shortlisted for the Class Of 2020, but they missed out, despite gathering more than half a million votes in the annual fan ballot.

In the end, Nine Inch Nails, Depeche Mode, T-Rex, The Doobie Brothers, The Notorious B.I.G. and Whitney Houston were announced as winners earlier this week.

The guitarist says: “Firstly I would like to congratulate all the winners who have been inducted into the 2020 Hall Of Fame.

"I wanted to express my heartfelt gratitude to all Thin Lizzy fans around the world, who voted in huge numbers to support our nomination to be inducted into Hall Of Fame.

“To receive a nomination after so many years was indeed an honour and one that would have celebrated Philip for his genius to write music and lyrics that has touched us all.

“It is of course disappointing that despite your efforts, we did not make the final cut. It would have been great to be inducted, but knowing of your continued support over the years means ultimately more than being recognised by a panel of industry experts.”

Gorham adds: “I really wish there could be a Hall Of Fame for Thin Lizzy supporters, as I would definitely vote for each and everyone of you, because you truly understood what we were trying to do. Looking forward to seeing you.”

Judas Priest received their second nomination in three years, but also saw their hopes dashed, leading their guitarist Richie Faulkner to brand the result as “a total joke.”