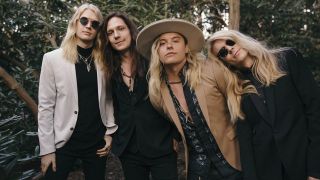 The song will feature on the band’s upcoming third album Bad Blood Rising, which will arrive on November 10 via M-Theory Audio.

Guitarist Johnny Cruz says: “Young Blood Rising was the last song we wrote before hitting the studio. We’ve been on the road touring for two and a half years, experiencing all the highs and lows as a band. Now feels like the right time to return and get the Cruz ball rolling again – we have new blood and new energy.”

He adds: “We filmed the video in a old storage hall, inviting a few of our diehard fans. We actually worked with a Finnish movie director, so the filming was slightly different this time compared to previous videos. Much faster, much slicker.

“Usually you spend at a day filming, but this time round it took only four to five hours. Go check out the video and come to our shows, you’ll not be disappointed.”

Bad Blood Rising is now available for pre-order while the cover art, tracklist and Santa Cruz’s upcoming UK tour dates can be found below.