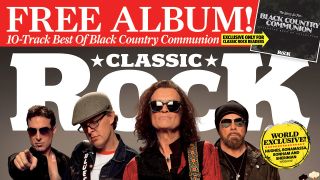 Black Country Communion
They had the world at their feet, but they let their own world implode. After a “long hiatus” they’re back, with a new album and the realisation that they’ve got something special.

George Thorogood
The bluesman behind 80s mega hit Bad To The Bone looks back on an eventful life and career.

Gun
Back when they began in ’89, the Scottish rockers were thrust into the big time. Now they’re back with a brand new album.

Scorpions
They thought it was all over. Then the ‘farewell tour’ turned out to be rather fun, so they’ve carried on a bit…

Stone Temple Pilots
They were pilloried like no other band before or since, but that didn’t stop them becoming one of the great bands of the 90s.

Steven Van Zandt
Guitarist with Springsteen’s E Street band, leader of his own band, label owner, actor (Silvio Dante in The Sopranos), radio host… And there’s more to ‘Little Steven’ than that.

The Darkness
We gave Justin Hawkins and co £50 and took them record shopping in London. What did they look for? What did they buy? Did they all fit into one photo booth?? Find out here.

What’s on your FREE CD

The Dirt We look back at the life and times of the late, great Glen Campbell; Robert Plant announces new album and tour; Ginger Wildheart hospitalised after suicide attempt; the bad blood within Journey just got badder; Lemmy gets an ancient sea monster named after him… Welcome back Josh Todd, Chris Hillman and Third Eye Blind… Say hello to The Shelters and Wayward Sons… Goodbye Felix Flanagan, Sonny Burgess…

Raw Power
If you want a limited-edition Paul Reed Smith Super Eagle II, you’d better be quick – and have 11 grand in your piggy bank.

The Stories Behind The Songs - Motörhead
“It’s got a natural speed, a velocity of its own and it rocks like a bastard,” Yes, it’s Ace Of Spades.

Q&A - Josh Homme
“You haven’t lived until you’ve been in the room with eight tubas.” This and more revelations from the QOTSA mainman.

Six Things You Need To Know About - Lionize
We met with the funky Maryland foursome as they prepared for the release of their biggest-sounding record yet.

Buyer’s Guide - Jeff Beck
One of the greatest blues-rock/fusion guitarists ever, his solo career spans six decades. Here’s where to find the gold.

Live Previews
Must-see gigs from Sparks, The Pineapple Thief, Kentucky Headhunters, Tigertailz and Focus. Plus full gig listings – find out who’s playing where and when.