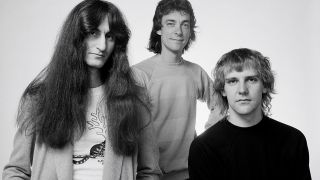 RUSHfest Scotland is back for its seventh year in Glasgow in June. This time round, the Rush fan convention will host three evenings between June 11 and June 13, including a very special ‘in conversation with’ event.

“We've kinda blown it out the park this year by bringing Terry Brown, Hugh Syme and [Rush covers act] Jacob Moon across as our special guests,” event founder Steve Brown tells Prog. “Hugh designed the poster for us, using elements from the upcoming Permanent Waves 40th anniversary reissue, with the label's permission.”

The first night kicks off on June 11 at Astley Hall with a headline set from Jacob Moon who returns for a second performance on June 13 at Drygate Brewery. Fans will also have the opportunity to hear Syme and Brown in conversation on June 12 at Ivory Blacks.

Says Steve Brown, “Our main event on Saturday June 13 will include a set from Jacob plus Moving Pictures and headliners Kepler Ten, as their Rush tribute alter egos R2. But we won't let them off the stage unless they play some original material too!”

RUSHfest Scotland was founded in 2014 and has so far raised more than £41k for cancer charities. This year, all profits will go to Cancer Support Scotland.

To purchase tickets, including a limited meet-and-greet option, visit the RUSHfest Scotland website.