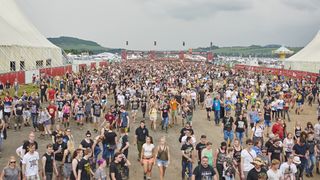 Today’s third and final day of the Rock Am Ring festival has been cancelled after scores of people were injured by lightning strikes over the weekend.

At least 80 fans were hurt after heavy thunderstorms plagued the German festival site close to Mendig in the west of the country on Friday night.

The bad weather continued on Saturday and with further storms forecast for today, local authorities stepped in and revoked the festival’s licence to ensure the safety of fans.

Festival organisers say they fully accept the decision and have asked fans to leave the site by 12noon local time today.

At least one fan had to be resuscitated on Friday night after lightning struck the festival. Eight people were seriously injured forcing organisers to set up a hotline on 0261 1032345 for those concerned about relatives.

It’s the second straight year that lightning has caused injuries to music fans at the event. In 2015, 33 people were hurt when lightning hit the festival site twice.

Black Sabbath were due to close the event with a headline set.