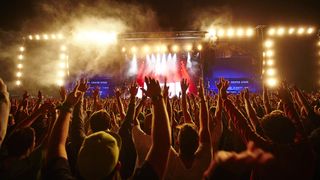 At least 42 people were taken to hospital on Friday night after lightning struck Germany’s Rock Am Ring festival.

Eight music fans are said to have suffered serious injuries.

It’s the second straight year that lightning has caused injuries to music fans at the event, which is held near Mendig in the country. In 2015, 33 people were hurt when lightning hit the festival site twice.

The official festival website reports that police, firefighters and the Red Cross were in attendance, and one person had to be resuscitated.

Rock Am Ring have set up an information hotline for those worried about loved ones and relatives on 0261 1032345.

Bands including Of Mice & Men, Tenacious D, Amon Amarth, Breaking Benjamin, Disturbed, Puscifer, Volbeat, Tesseract, Issues and Panic! At The Disco were on the Friday bill, which was resumed after the thunderstorm had passed.

More lightning is forecast on Saturday and Sunday near the festival site, according to Rock Am Ring’s Facebook page.