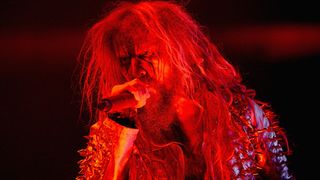 Manson, who was behind a string of brutal killings in California in the late 60s, died earlier this month after spending almost half a century behind bars.

Charles Manson: The Final Words will be broadcast on the Reelz network at 9pm ET on Sunday, December 3 – and producers have released a teaser trailer featuring Zombie’s voice, which can be seen below.

Upon hearing the news of Manson’s death, Marilyn Manson posted a Twitter link to his cover of Manson’s Sick City, which originally appeared on the 1970 album Lie: The Love And Terror Cult.

That move drew the ire of Kiss vocalist and guitarist Paul Stanley, who called it “pathetic” and accused the shock rocker of seeking publicity.

System Of A Down guitarist Daron Malakian also said that Charles Manson’s interviews and music “were a big influence” on him when the band were writing the Toxicity album.