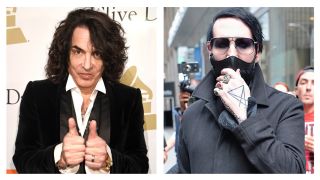 Kiss vocalist and guitarist Paul Stanley has slammed Marilyn Manson after the shock rocker responded to the death of murderous cult leader Charles Manson on Twitter.

Charles Manson, who was behind a string of killings in California in the late 60s, died earlier this week after spending almost half a century behind bars.

Upon hearing the news, Marilyn Manson posted a Twitter link to his cover of Sick City which originally featured on Charles Manson’s 1970 album Lie: The Love and Terror Cult.

That drew a response from Stanley, who tweeted: “Pathetic when somebody whose career never really took off is desperate enough to try for publicity by connecting himself to the news of a murdering scumbag’s death.”

Meanwhile, System Of A Down and Scars On Broadway guitarist Daron Malakian has reported that he was sad to hear the news of Manson’s death.

He says on Instagram: “Very sad to hear the news about Charles Manson’s death. During the time I was writing the Toxicity album, Manson’s interviews and music were a big influence on me as an artist.

“I titled the song ATWA after Manson’s environmental organisation. My interest was in the way he articulated his thoughts and his views on society, not in the murders.”

After coming under fire for the original post, Malakian responded: Let me try to explain one more time for those who just don’t get where I’m coming from on this Manson post.

“I don’t back the murderer Charles Manson, I back his art and his views on social and environmental issues.”

This is Charles Manson's letter to Marilyn Manson