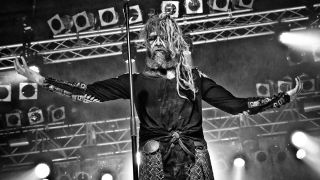 Rob Zombie has launched a ‘Spooky Christmas Stocking’ with animal charity PETA (People For The Ethical Treatment Of Animals).

The black Christmas stockings include items such as “vegan beef jerky, tasty” and “hot cocoa for a spooky holiday.” There is also chocolate and “psychedelic vegan lolly pops.”

Zombie says: “This is for the Holidays. Buy this and help something besides yourself.”

Zombie is a long-time vegetarian and animal rights activist. The stocking costs $44.99 at the PETA website.

PETA says: “Even the undead can enjoy this limited-edition horror-themed holiday gift set from musician and director Rob Zombie.

“It features the best of both worlds, much like Tim Burton’s The Nightmare Before Christmas. With a variety of tasty vegan goodies and a ‘Flesh Is for Zombies’ mug stuffed inside a black Christmas stocking, it’s the perfect gift for brain-suckers and vegans alike.”

He also recently released his latest film 31 across Europe and he said he had something completely different up his sleeve for a future project.

Zombie headlines the Encore Stage at Download 2017 on Saturday, June 10.