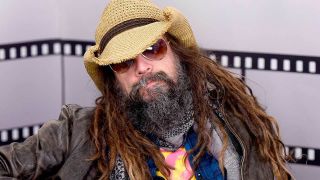 Rob Zombie had always been a misfit. From the ‘80s New York art-rock scene to his mutation into a famous director, he’s never done things the easy or indeed the normal way. That’s metal.

“I was born Robert Cummings in Massachusetts on January 12, 1965. Wikipedia got that one right!”

Were you from a very musical family?

“No. I didn’t know anyone who played an instrument, or even owned one. No one in my family even seemed to like music that much. I discovered music through watching the TV, because most of the shows had a musical theme – like The Monkees, or cartoons like The Groovy Ghoulies or The Archies. It didn’t matter what the goofy characters were, they always had a rock band – like The Banana Splits, which was awesome.”

How did you get into performing music?

“At some point I got a guitar, maybe when I was in kindergarten. Then I did what so many people do: you find a couple of other guys with instruments and you start a band. I picked bass and my other friend picked drums. My high- school band went nowhere because we all got sick of each other, so apart from that, my first band was White Zombie.”

What kind of student were you at school?

“Terrible. I thought school was incredibly boring and I hated it. I couldn’t sit still, I couldn’t focus. I would always stay up really late at night because I wanted to watch movies on TV, so I would fall asleep in school all the time. I was dead on my feet all day long.”

Did your parents push you to get an education?

“Not so much, no. Ha ha! I did graduate high school, though, because in my last couple of years I figured out an incredible scam. Essentially I shouldn’t have graduated, but I realised that if I signed up for many, many art classes I could get my grades up enough to graduate. Basically I went to school, signed in and then left and did other stuff all day long. I just made sure that all my artwork got turned in. I got straight A grades in art and I got perfect grades for attendance, although I was never there. Nobody was paying attention, so I got away with it.”

When did White Zombie start to get serious?

“We started in 1985 and we were a bunch of people who could only play our instruments a bit, and like any band the members would change every five minutes. That’s just the way it goes. We were always serious, but it took a couple of years until anyone even remotely gave a shit at all, and I mean on a really tiny level. There was a New York scene that White Zombie got connected to – a sort of art-rock scene, that Sonic Youth were the kings of – and other bands like Pussy Galore were in there too. It was cool, we felt like we had a tiny home, at [legendary NYC club] CBGBs anyway.”

When did you feel that the band had become a success?

“It wasn’t until we signed to Geffen and had a hit with La Sexorcisto: Devil Music, Vol. 1 [1992] that we felt like we were a success. Before that no one gave a shit: that album changed everything, almost overnight. Up ’til that point, even though we were signed to a major label, we were still broke and touring in a van and playing clubs to basically nobody.”

Did you have to do rubbish jobs to pay the bills?

Was it your job to make pages aesthetically pleasing?

Do you think it’s fair to say that White Zombie were never a straight-ahead metal band?

“Oh yeah, we were never a straight-ahead anything. Even when we were in the art-rock scene we were metal, because we all had long hair and we liked to headbang and jump around, which none of those bands did. Then, when we moved into the metal scene, we were too weird, because we had beards and dreadlocks and because of the way we dressed. We got gigs opening for other bands like Danzig and Anthrax and Megadeth, and the crowds were looking at us, like ‘What the fuck is this?’ Almost all the metal bands had the Metallica look – skinny black jeans and whatever – and we looked like a bunch of freaks, so we never really fit in. And then when grunge hit, we were too metal to be grunge and not alternative enough to be alternative! We had to forge our own scene, but I kinda liked it in a way; I never wanted to be pigeonholed.”

“It had run its course. Bands are weird: you start them at a certain age and you’re supposed to stick together forever, like you’re gonna always be teenagers with the same mindset. Success is a big thing that you can never plan for, because it affects everybody differently. I don’t want to blame myself or anyone else in the band – it’s just that the band didn’t work any more. Rather than continuing on and making shitty records and having it all fall apart, I thought ‘Let’s just end it on a high point.’”

Your solo career seemed to take off very quickly after the split.

“Yeah, I actually ended up being more successful than White Zombie, which I didn’t know I would be. There’s not a long track record of people having more successful solo careers after leaving bands, especially in the hard rock field. It’s pretty much only Ozzy, so there wasn’t a lot of people to look to. I just wanted to be happy being in a band, so I thought ‘Even if my solo career is a quarter as successful as White Zombie, I don’t give a shit, it’ll still be great.’ But then when it went on, and was actually the same or bigger, it was awesome.”

How did you get into directing films?

“That was something I always wanted to do, but coming from where I came from, I had no clue how to make that dream come true. I first started directing White Zombie videos and my solo videos, and then I did them for Ozzy and Black Label Society and other bands, and over time directing videos became my crash course in film-making. I’d always studied movies and read about them obsessively since I was a little kid, and then I got a chance to make one, so I took it and ran with it.”

Would you ever move away from directing horror movies into other genres?

“Sure. The first one I did [House Of 1000 Corpses, 2003] was a horror movie, but I didn’t want to make another horror movie when the sequel came along, so I went out of my way to make it look and feel different. I wanted to make it feel like a postmodern Western, and ever since then there have been other projects that I’ve wanted to get off the ground. But the problem is, once you have success in one area, you get branded with that. Someday I’ll make some other types of films. I just love making movies, although getting the money to make them is so fucking hard that saying no to someone who is offering you money to make one seems psychotic.”

What are the differences between the record and film industries?

“The movie business is much more difficult than the music business, because it’s about bigger money. If you want to operate on a big level and have your movie in lots of theatres all around the world, the amount of money it takes to get those things done is insane. Even a low-budget movie costs $15-20million. If you asked someone to give you $15million to make a record, they’d be like, ‘Fuck you!’”