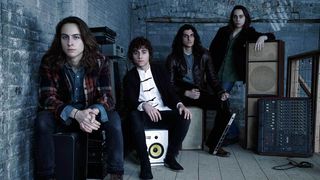 Hotly-tipped Michigan rockers Greta Van Fleet have announced details of a double EP to be released in November. From The Fires features the four tracks that appeared on this year’s Black Smoke Rising EP, plus four new songs.

Putting the four old tracks and the four new recordings together made perfect sense, says singer Josh Kiszka: “All eight of these songs share a theme of basic humanity.”

The new EP’s artwork (shown below) is inspired by camping trips the band — Kiszka, plus brothers Jake (guitar) and Sam (bass, keys) and drummer Danny Wagner — took as kids.

“Our extended families and friends spent part of every summer together at a place called Yankee Springs,” says Josh. “We were out in the middle of the woods, and every night, we’d sit around a campfire, play music and tell stories. I always loved that as it reminded me of ancient times when people would gather around the fires with the tribes’ elders telling fables of wisdom and courage, passing down human history. That concept is where the cover art and title come from.”

From The Fires is released on November 10. The band are currently on tour in the US (dates below). All remaining dates apart from Tucson and Chicago are sold out.

Greta Van Fleet: "There are worse things to be compared to than Led Zeppelin"