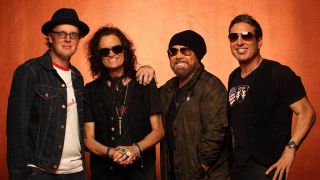 Supergroup Black Country Communion have released a video for Last Song For My Resting Place, a highlight from the band’s recent BCCIV album. The song was inspired by the story of RMS Titantic, which sank in April 1912, leading to the deaths of over 1500 people.

“I was intrigued by the notion of Wallace Hartley [violinist and band leader on the Titanic], says BCC guitarist and singer Joe Bonamassa. “The fact that he played everyone off the ship to the detriment of himself brings you back to a more selfless time in our history. I don’t believe the conditions are around in 2017 for something or someone like that to step forward and be recognised. I felt that his story and this song played well on this album. His violin is in a private collection and survives to this day.”

“Joe had two parts to this song: the intro and outro where the track is suited with a mandolin and fiddle,” adds singer and bassist Glenn Hughes. “The middle part, heavy and dramatic and dark. Absolutely love Joe’s vocal on this song. A tale of the Titanic going down into the deep, and a violin that would perish alongside its many fateful passengers.”

BCCIV was released in September, and was the band’s first album since 2012’s Afterglow.

“We had around four months to write this album, and I think the results speak for themselves,” saysHughes. “All four of us wanted to make a record that stood up to the first three albums.

“However, the new album is more of a progression, as we wanted to be careful not to repeat the previous albums. A lot has happened since we last recorded the Aferglow album, so, in many ways, the new album shows BCC with a much harder, riffier and bigger and bolder sound. If you’re looking for a folk album, this ain’t the one.”

BCCIV is available now. Black Country Communion play Wolverhampton’s Civic Hall on January 2 next year, and at the Eventim Apollo in London on January 4. Tickets are on sale now.