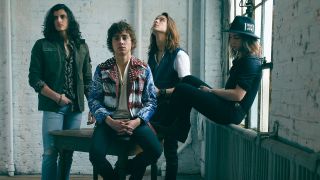 It’s natural to be sceptical when Greta Van Fleet take the stage. Faced with the prospect of this cherubic Michigan quartet – average age 19 – the usual response is to fold your arms, arch an eyebrow and prepare a savage put-down to shout into your mate’s ear. Then they start playing…

“It’s always been that way,” shrugs frontman Josh Kiszka. “When you’re fifteen and you go into a bar to play rock’n’roll, you can see it in their faces. But after that initial jolt their minds change pretty quickly.”

Given their youth, there’s not a whole lot of back story to get through. It was 2012, says Josh, when he took up with twin brother Jake (guitar) and younger brother Sam (bass); they added Daniel Wagner (drums) a year later.

“Everyone has their different qualities,” Josh explains. “Jake is the rock guy, Daniel is the soul man, Sam is the jazz type, I like world music. Daniel is a little docile. Sam is the classic smart-ass. Jake is a romantic, that classic picture of a man with a bottle and a guitar. And… I dunno, I can’t say much about myself.”

Let’s cast Josh as ‘the screamer’.

“It was kinda accidental,” he says of discovering that somersaulting voice. “But I’m a terrible person to be a singer. I don’t warm up and I’m out all night. What do I get up to? Revelry.”

In fact Josh’s exhilarating ‘ooh-mama’ screech is so reminiscent of a certain golden god – an impression rammed home by his twin’s swaggering blues-rock riffage – that you’d be tempted to roll out the ‘next Zep’ tag were that not invariably the kiss of death.

“When bands get compared to Zeppelin, it’s not always in a favourable light,” Josh considers. “But there are worse things to be compared to.”

“I think it’s a dynamic EP,” says Josh. “It can be folk or rock’n’roll. It can be tongue-in-cheek or philosophical. Flower Power is about the splendours of love, Safari Song is our ode to the blues and Black Smoke Rising is about the lessons of history.”

Of course, history is full of cautionary tales about bands who promised much but were sunk by the weight of expectation. And yet, faced with these four songs, Lava Records boss Jason Flom’s proclamation that his boys are the “future of rock’n’roll” doesn’t seem quite so ridiculous.

“Well, I don’t know about that,” says Josh. “I guess that’d be something we’d wear very proudly. But that means we have a lot of work to do.”

Black Smoke Rising is out now via Lava Records.

“We love Led Zeppelin, and it’s a great thing to be compared to,” says Josh Kiszka. “But there’s really no one album that’s had a complete influence on me, because there are so many that are so damn good. Howlin’ Wolf’s stuff is incredibly influential. Joe Cocker. Wilson Pickett. Sam and Dave. Even John Denver.”

Getting the inside story behind Led Zeppelin's 'lost' film

How Presence pulled Led Zeppelin back from the brink of crisis

Is Led Zeppelin III the band's most important record?