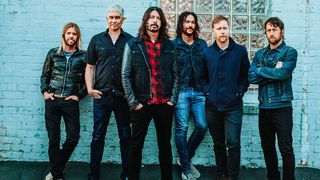 A video showing Foo Fighters performing their track The Pretender, which was recorded at their recent show at Acropolis in Athens, Greece, has been released.

The song from 2007’s Echoes, Silence, Patience & Grace was part of a set that will feature on upcoming PBS series Landmarks Live In Concert which will be broadcast on November 11.

The Foos made history by becoming the first rock band to play at the historical site, after the Central Archeological Council of the Greek Government granted them special permission.

Vocalist and guitarist Dave Grohl says: “We’ve done some crazy things over the last 20 years, but I think this might be the craziest thing the Foo Fighters have ever done.”

Landmarks Live In Concert features artists from across a variety of musical genres playing shows at some of the world’s most famous locations, including Prophets Of Rage’s set at The Stone Pony in New Jersey and Kings Of Leon’s performance at the Beale Street Music Festival in Memphis.

Foo Fighters are currently on tour across the US. Find a list of their 2017 tour dates below.