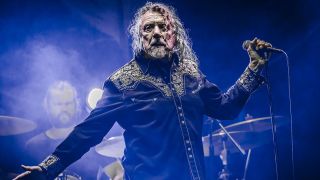 Robert Plant has once again ruled out the possibility of a Led Zeppelin reunion.

While he, guitarist Jimmy Page and bassist John Paul Jones reunited for the Ahmet Ertegun Tribute Concert in London in 2007 with Jason Bonham taking his late father John’s place behind the drum kit, Plant has distanced himself from further reunions taking place in the past.

And in a new interview with the Daily Telegraph, Plant has once again closed down the possibility of any sort of reunion happening in the future.

He says (via Radio X): “You can’t ever really go back. It’s tough enough repeating yourself with something that’s a year old, never mind 49 years old. I’ve got to keep moving.”

Plant launched his new solo album Carry Fire last week and reports that he’s getting better with age. “My ability to mould any frame of mind to the temperature, tempo and temperament of the music, it’s getting closer,” he says.

The vocalist also admits that the death of so many in the music world over the last few years has made him more aware of his own legacy.

He adds: “How many voices are disappearing? The contributions to our time of listening and wonder. There’s always a trip going to say goodbye.

“Maybe that’s how people think about me! ‘Fucking hell! Better go and see Planty! How much longer can he keep it up?’”

Plant will head out on tour in support of the new album from next month, with dates planned across the UK and North America. Find a full list of live shows below.

Robert Plant: "No one could have taken over Bonham's job. Impossible!"