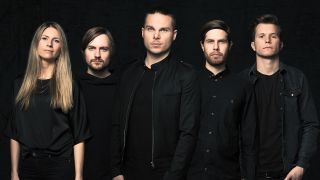 Rendezvous Point, the Norwegian melodic prog rockers who feature Leprous drummer Baard Kolstad, have premiered their brand new promo video for Universal Chaos with Prog. It is the title track of the band's second album, which is due on May 24.

"I  had already written this song in 2013, before Solar Storm came out. We hadn’t taken the song seriously enough to be on the first album, because we felt that we already had the material we wanted for the first album then," guitarist Petter Hallaråker tells Prog. "But this one came up again when we looked at the material we could use for the second album. It was heavily inspired by Meshuggah for the rhythm parts. I was imagining making a song that was just filled with dark chords and scales, and melodic minor seemed to fit well in this dark vibe.

"There are also moving minor chords and augmented chords, which I absolutely love. Kind of the same thing that Dream Theater does in the intro for A Nightmare To Remember, except they are using several chords. I ended up only using two or three chords mostly. And I wanted it to be a little technical and crazy too. I was imagining an old church at night, with naked trees around, bats, full moon, graveyards, all that dark stuff. And the song ended up sounding pretty chaotic, and I think among the most chaotic things that exists has to be the universe, or quantum physics or something like that. So I thought Universal Chaos described the song well."

Universal Chaos is the second single to be taken from the forthcoming new album, following on from Apollo.

"Our plan was to shoot both Apollo and Universal Chaos the same weekend," continues the guitarist. "The reason we wanted Universal Chaos as a single was that it was a huge contrast to Apollo, and we wanted to showcase the diversity in our sound with the two singles."

Universal Chaos can be pre-ordered here.