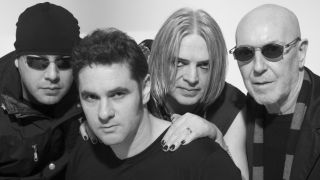 Nazareth singer Linton Osborne has left the band, saying “it didn’t work out.”

He was confirmed as replacement for original frontman Dan McCafferty last year, after health issues forced the veteran to retire.

Osborne had performed a number of live shows with Naz during 2014, but some concerts were cancelled at the end of the year after he contracted a throat infection. Last week they announced their winter UK tour had also been postponed, with bandleader Pete Agnew reporting: “Although Linton is showing a slight improvement, his voice is in no condition to perform satisfactorily at this time.”

Now Osborne says via Facebook: “I am no longer a member of Nazareth. It didn’t work out, for me, or for the band. I’d like to thank Pete, Jimmy Murrison and Lee Agnew for the opportunity. I’d also like to thank Dan for his support and encouragement. Most of all, I’d like to thank the fans – you guys are something else, and because of you it has all been worthwhile.”

He adds: “I hope to see you all again in the future at one of my own gigs. I’d also like to wish my successor all the best and Nazareth a fantastic 2015 and beyond.”

In a recent interview with Classic Rock’s Dave Ling, Pete Agnew said: “The fans have accepted Linton better than I expected. He’s settling in well – and considering who he’s following I’d give him a VG+.”

Agnew became the sole remaining founder member when McCafferty announced his decision to leave in 2013. He’d suffered increase issues with Chronic Obstructive Pulmonary Disease, which led to two incidents of him collapsing on stage.

The crunch came after an attack of COPD forced him to stop a Swiss festival set after three songs. He later told TeamRock: “When I came off stage I said to the boys: ‘I can’t keep doing this to the band.’ I can’t embarrass the boys and the fans. If you can’t do the job you shouldn’t be there – Nazareth’s too big for that.”

McCafferty’s last album with Naz, Rock’n’Roll Telephone, was released last year. He recently collaborated on a song with Scots-American artist Stevie Agnew, after pointing out that studio performances remain possible although live sets are out of the question.

An intimate London show recorded with Osborne in November is scheduled for release on DVD in March.