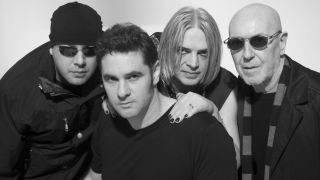 Nazareth have been forced to call off another run of UK shows as vocalist Linton Osborne is suffering continued throat problems.

He joined the band last year after original singer Dan McCafferty was forced to retire as a result of his own health issues.

A number of shows were postponed last month after Osborne contracted a virus – although the band delivered a concert to just 125 diehard fans, which will be released on DVD in March.

Bassist and sole remaining founding member Pete Agnew says: “We have to postpone our UK tour. Although Linton is showing a slight improvement, his voice is in no condition to perform satisfactorily at this time.

“He’s been told that there is no immediate treatment for his condition, and that resting his voice is the only way to alleviate the problem.”

In December Agnew said of 2014: “We won’t be sorry to see it end.” But he added: “It was always going to be difficult introducing a new singer, but we were pleasantly surprised by the reaction to our new guy. As you can imagine he was more than a little nervous.”

Replacement UK tour dates will be announced in due course. After his debut appearance with Naz, Osborne hailed McCafferty’s “class” in calling to wish him luck. McCafferty and Agnew last month appeared on a track entitled The Fall Of Man by Scots-American musician Stevie Agnew.