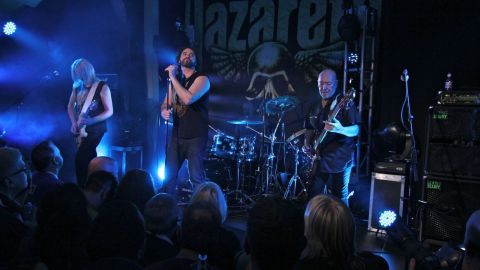 At the first Metropolis Session, 125 fans were able to see Nazareth perform some of their greatest hits up close. The show was filmed for a Rock Screen Presents DVD release due in March 2015. We snuck in at the back and took notes.

**This new singer. He’s a bit good **Linton Osborne’s his name. Not at all a Dan McCafferty clone. He has a tremendous range, and while he’s more than capable of delivering that gruffness and growl which has been the band’s trademark for so many years, there’s so much more to the Scot’s vocal prowess. This guy could revitalise Nazareth.

He’s also great with the fans There are just 125 diehard Nazareth followers in here, and it’s a real test for Osborne. It’s a lot tougher to have everyone up close and personal than to face thousands at a festival. These people know every nook and cranny of each song. But, while he begins a little tentatively, Osborne is quickly into his stride, striking up a natural rapport with the rest of the band, and also with the fans. One criticism: some of his jokes as song intros are rubbish!

Guitarist Jimmy Murrison is undervalued Murrison has now been in the band for 20 years, but he’s still haunted by the spectres of Manny Charlton and Zal Cleminson. However, the man’s a prime talent in his own right. Murrison has succeeded in putting his own mark on songs like Razamanaz, Shanghaied In Shanghai and Hair Of The Dog, and shines throughout.

**Good to hear some unexpected songs in the set **It’s not often Nazareth dust down Sleeptalker, Dear John and May the Sun Shine, but they’re here tonight, and add to the sense of occasion. It makes this more more of a unique experience, and lends an extra frisson to the performance.

This is a gig set up for a DVD. But the demands of the camera crew never interfere The band do have to restart two songs because they messed up the intros, but they’d have done this anyway in the normal runs of events. And everyone takes these missteps in fine humour. Despite the heat inside what’s really a recording studio, the atmosphere throughout is tremendous. At no time do you feel that the demands of filming override everything else.

There are some breathtaking highlights Best songs of the night are_ Heart’s Grown Cold_ (with Osborne electrifying), This Flight Tonight (the whole band isn peerless form), and the encore couplet of Love Hurts and Expect No Mercy – a tour de force.