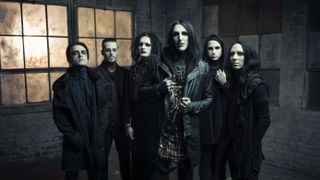 Motionless In White have announced a competition to fan-source the album artwork for their forthcoming album, Graveyard Shift.

The Pennsylvanian outfit have teamed up with art community website Creative Allies to offer one lucky fan the chance to design the official cover art for the follow-up to 2014’s Reincarnate – which is due out in winter 2017. The winner will also be given a $2000 cash prize and a round-trip ticket to attend a private listening of the album with the band.

Motionless In White will also select 24 designs to promote their album in the run-up to its launch. Each will be awarded $150 and artists will be credited for their work.

Chris Motionless says: “We tried to come up with an album title that represented something about the band that we’re most proud of – that’s been our unwavering dedication, passion and work ethic for what we do. We treat this very seriously and as time has gone on we’ve became more and more passionate about it – what it is to be a band, create music and put forth our form of art.

“I feel like it’s now less about our own personal accomplishments, more about coming from a place of respect, admiration and mutual understanding for people who share that dedication and drive. People are out there busting their ass and shovelling shit to basically survive or chase their dreams.”

The singer says the contest idea was inspired by their recent tourmates Korn, who launched a similar artwork contest for 1999 album Issues – which he says is the “coolest thing” he’s seen a band do.

He adds: “There’s a lot of artists and talented people, creative minds that can come up with something far better than what we can come up with. We want everybody to have a chance to be a part of this album.”

Further release details for the album will be revealed in due course.

Motionless In White launched their video for track 570 earlier this year.

The 10 songs that shaped Motionless In White's sound